skip to main | skip to sidebar

Check out my post about the current offering from the CFBA tour: Offworld, by Robin Parrish.
Posted by lindaruth at 8:28 PM No comments:

My impressions of the new U2 album

I've posted my impressions of the new U2 album No Line on the Horizon over here.
Posted by lindaruth at 11:32 PM No comments:

The musings are moving

I'm moving my blogging over to a Word Press blog that I'm calling Observations from the Windowsill. Perhaps not a lot more original of a title than this one, but when I find a theme, I stick with it. :) I moved my devotions and other links to published things over there a while back and I like the interface. There's also lots of nice themes to choose from. This blog will remain in place for now (for some reason, my post about living in a small town still gets a lot of hits), but I may migrate the entries eventually.

I hope to be a little more focused in the new blog -- writing about what I'm reading, watching, listening to, and thinking about. (Maybe that's not really all that focused, but I like to think it is.) Anyway, if anyone is interested, that's where I'll be.
Posted by lindaruth at 10:22 PM No comments:

One of the joys of my new computer (I got a Mac laptop back in November) is that I can take advantage of Netflix's "Watch Instantly" option. And lately I've been watching episodes from the first couple of seasons of Columbo, the classic TV show with Peter Falk. It holds up pretty well.

Columbo was originally part of a rotating set of programs on NBC -- if I remember correctly some of the other shows it alternated with were McMillan and Wife (with Rock Hudson and Susan St. James) and McCloud (with Dennis Weaver). I think there were a couple of others. But Columbo was my favorite. The series featured a different guest murderer every episode and the audience always knew who the murderer was from the start. The pleasure came in watching Lt. Columbo (Peter Falk) solve the crime. He was always rumpled and untidy and drove an old junky car. He chewed on a cigar and didn't always seem like he was on top of things. But he was, of course. He seldom raised his voice, let alone chased anybody or got in fights, but he always caught the criminal.

Sure the show followed a formula, but it worked because of several things. One, of course, was Peter Falk. He was perfect and he had a great character to work with. Columbo was an everyman in a rumpled raincoat. When he met aging movie stars, he was starstruck (but it didn't keep him from arresting them). He was unfailingly polite. And he was shrewd. He didn't need to be brawny -- he had brains. He was middle-aged and that was OK.

But even a great actor has to have good material to work with. The writing elevated Columbo above the standard TV mystery fare of the day (or now, for that matter). The network gave the episodes about an hour and a half, so there was time to set up the story and time for some plot twists. Some episodes are better than others, but generally they're all pretty good. And when you watch the credits, you can see why the writing is so good -- among the writers and editors is Steven Bochco, and a few other familiar names from TV in the 1970s and 80s.

Of course, part of the fun of Columbo was watching some excellent guest stars almost get away with murder. There's a mix of TV stars of the era and older movie stars -- Robert Culp, Ray Milland, Jackie Cooper, Anne Baxter, Julie Newmar, Leonard Nimoy and many others. And they usually had good material to work with.

To top it all off, the series had excellent music, with a theme composed by Henry Mancini.

I watched one of the best I've seen so far a couple of days ago -- "Double Shock," from the second season. It stars Martin Landau as twin brothers who are as different as night and day, except for their mutual need for cash. Columbo steps in to investigate when their wealthy uncle is murdered. It's very good and kept some surprises for the end. And this was one of the episodes written by Steven Bochco (who created Hill Street Blues, another excellent cop show).

So, if you want to get the most out of your Netflix subscription and have a reasonably fast internet connection, enjoy some episodes of this classic mystery series. (And if you don't subscribe to Netflix, see if you can track down some DVDs of the series. It's definitely worth it.)

[Maybe this doesn't have a whole lot to do with the mystery novel I'm supposed to be revising this month, but I figure watching good mysteries from time to time is always good research. At least that's what I keep telling myself.]
Posted by lindaruth at 8:26 PM No comments:

Writing. A friend of mine here likes to tackle a NaNo-like task (that's 50,000 words in a month) during February instead of November. A few of us have joined her in the effort this year and so today I'm starting a major rewrite of Secrets in Connors Grove. (That's the novel I wrote about 5 years ago and have fiddled around with off and on since then.)

I haven't done much writing for several months, but I want to get back into the groove again. I'm rusty and I figure 28 days of steady effort should help. I know this novel can be better than it is -- the characters need to be more real, the conflict needs to be less contrived, and the story can be tighter. I think I am a better writer than I was 5 years ago, so we'll see what I can do with it.

I may or may not post some word counts. We'll see.
Posted by lindaruth at 3:14 PM 1 comment:

Jeanne Damoff's book, Parting the Waters, is a wonderful testimony to a family's journey of faith. I've known Jeanne through the Faith in Fiction community and her regular posting at The Master's Artist, so I knew a bit of the story of her son Jacob. But in her book, she tells of Jacob's near-drowning and long recovery in more detail. And what struck me as I read it the other night (yes, in one sitting) was that it was not a kind of movie-of-the-week story for Christians. It's a story of a family dealing with tragedy and asking the hard questions about how God could let such a thing happen and facing their own grief for the future that was forever altered. Jeanne doesn't gloss over their doubts and fears. But she also shows how they do come to see how God works in surprising and even miraculous ways and can give thanks for his goodness.

Jeanne weaves the story well. She uses the metaphor of ripples in the water to show the far-reaching consequences of Jacob's accident. The reader walks with the Damoff family as they deal with all the challenges and decisions after the accident. We meet the people of Marshall, Texas, and the doctors and nurses and physical therapists who cared for Jacob. By the end of the book, you feel you're a part of the community. And you rejoice with each step Jacob takes toward recovery. And, most important, you'll marvel at how God has brought beauty out of tragedy and give thanks for his goodness.

This is a good book for anyone -- whether you've experienced a similar tragedy or not. But it will be especially meaningful for people who are facing difficult times and wondering where God is. Jeanne also includes a section at the end that deals more directly with the theology of suffering, which is helpful.

Others are posting this week about Parting the Waters and you can find a list here. Be sure to visit some.

You can also visit Jeanne's Facebook page and share your thoughts about the book (and see what others are saying).
Posted by lindaruth at 8:34 PM 2 comments: 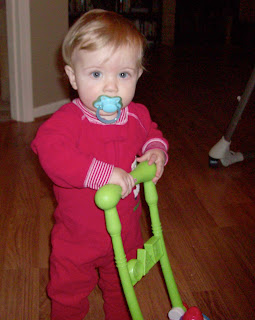 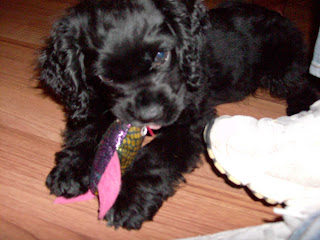 I'm babysitting for Kiernan for a few days, which is lots of fun, but exhausting. Add in a cocker spaniel puppy and I'm beat. But I wouldn't trade it for anything. Right now, Kiernan's asleep (hopefully for the night) and Woody is napping. He'll have to go out again in a bit, but right now he's quiet in his crate, so I'm letting him be. It's the most quiet the house has been all day (which began about 5:30 this morning).

Woody is cute, but he gets so excited and jumps on Kiernan, which knocks the boy down, so I try to make sure Kiernan is in his high chair or play pen (or taking a nap) when I let Woody out of his crate. And Kiernan is 1 and walking and getting into everything, so I have to have him someplace safe while Woody goes out and does his business. (And of course, adding to the entertainment are the two cats, Franklin and Winston-- they stay clear of Woody, though, but they roam around at night and make odd noises.)

So above are a couple of pics: Woody attacking a stuffed fish and Kiernan with his toy mower (which we gave him for his birthday and it's very fun and noisy). He actually pulls it along behind him more than pushes it, but he seems to enjoy it all the same.
Posted by lindaruth at 8:42 PM 1 comment:

lindaruth
I didn't know what I wanted to be when I grew up until I was 37 years old. I've written a mystery novel, which desperately needs revision, and started a couple of others. I've also been writing short stories and devotions. I am now a grandmother. The links below and the ones I mention in various postings are things that interest me. Your Mileage May Vary.

This is a Flickr badge showing public photos from Linda Ruth. Make your own badge here.